Dennis Canty grew up on both coasts of the United States, born in California but spending most of his childhood in Washington DC.  His earliest memories are of days on Pacific beaches, on Chesapeake Bay, and out in the family sailboat.  He headed west for college in the 1970’s and has stayed in the Pacific Northwest ever since, raising two daughters, enjoying his marriage to Lisa, and running a successful consulting business until he retired in 2016.

His painting practice really began once he retired.  Although Dennis dabbled in drawing, watercolor painting, and ceramics during his working life, he never had the time or drive to concentrate on art.  In the last three years, he has finally had the time to paint seriously.  He has taken classes from Anne Hebebrand and Marsha Dahlquist in Todos Santos and works for four or five hours most days in his studios in Todos Santos and Washington State, where he and Lisa live in the summer.

Dennis mostly paints landscapes and seascapes in oils on canvas and boards.  In the winter, these focus on the land and water of Baja California.  In summer, the yellows and reds get put away and Dennis paints the blues and greens of the Olympic Peninsula and Puget Sound.  His influences include the seascapes of Gerhard Richter and Joaquin Sorolla and the landscapes of Russell Chatham and Maynard Dixon.

Dennis can be reached at dennisvcanty@gmail.com.  His work is available at Mangos Gallery in Todos Santos and through his website at www.dcantypaintings.net. 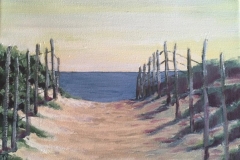 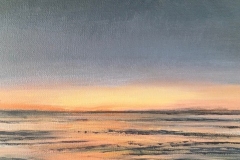 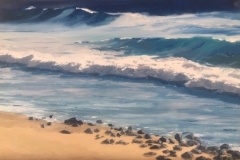 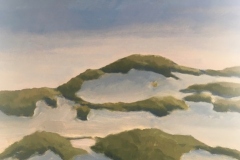 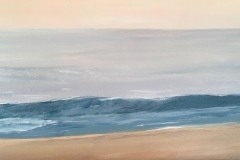